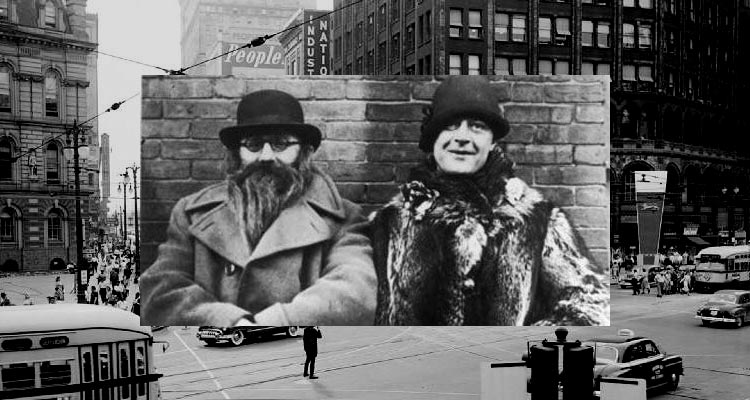 History about the detectives of epoch of dry law

So, let's begin. Isidore Einstein was one of the main enemies of the alcohol mafia. Prior to the Prohibition, he worked as a postal clerk in the New York region of Lower Eastside. When the ban on alcohol came into force, he expressed a desire to go to work at the Federal Bureau of the Ban. As Isidore himself said, they paid $ 40 a week, which seemed like a good chance for a guy with ambitions.At the time of the hiring, the chief agent of the Bureau, James Shelvin, told Izzy, who weighed 102 kg with a height of 1m 60 cm, that he had the wrong type. To which Izya replied that he agreed that he did not have the experience of detective work, but he knows people well, their habits and desires, which means he can easily rub into trust. Looking ahead, we say that he will never be revealed as a detective. In addition, Isidore, being a native of Austria-Hungary, knew six languages, including Polish, German, Hungarian and Yiddish. This was a decisive advantage for taking him to the staff of agents.

One of Isidore's first appointments was a bar in Manhattan, where agents were constantly exposed. Izya came there with an agent's badge attached to his coat and loudly said: “Who will pour a glass of whiskey to the honored agent of the Bureau?” The bar owner laughed and poured him whiskey. “Your badge, where did you get it?” The bar owner asked. “I will show you where,” Izzy answered and took the owner of the bar to the station.After working at the Bureau for some time, Isidore asked his boss if his friend, Mo Smith, the owner of the cigar shop, could get an agent's place in the Bureau. Isi's main argument was that Mo "did not look like an agent." Chef agreed.

The magnificent tandem of Izzy and Mo

Together, Izzy and Mo were the perfect match for working undercover. They created types one more interesting than the other, each following was better than the previous one.They had at their disposal dozens of false whiskers, mustaches and beards, nine types of glasses, six artificial papier-mâché noses, eleven wigs and hundreds of business cards, each with different names and professions. They believed that the correct use of props - a fishing rod, a bucket of cucumbers in the hand, a trombone or a red nose of a drunkard - leads to success in the matter, since such trifles create the finishing touches of the selected type.

Their most ingenious invention was an “artificial pharynx”, a drainage system that made it possible to discreetly collect evidence. They allegedly took a sip of alcohol, and it merged through the tube into a rubber heating pad.When Easy and Mo began their careers, the operation to eliminate illegal bars was the first largest in the United States. The city had more than 32,000 drinks, and they were located in the most unusual places - at the tables of registration desks, among the roar and knock of construction sites, in the basements of fashionable clubs and in fashionable houses, even on the observation deck of a Chrysler skyscraper there was one. The walkers made a bet who quickly finds an underground wineglass.Bootleggers transported alcohol through a sophisticated underground pipe system. The most famous was a 3-kilometer beer pipeline that passed through the Yonkers sewer.

The owners of the underground bars came up with secret signs that meant "seller" or "broker" and distributed them among their clientele. They also distributed flyers by stuffing them in windows and mailboxes, and also distributed probes to their homes. To drink, people used various secret codes, just like spies. “Give me ginger ale,” the man asked, “Domestic or imported,” the import was the correct answer; upon receiving it, the bartender poured a glass of whiskey.

Easy and Moe showed the best results in New York, thanks to their operational development, a lot of mafia were arrested and a couple of hundred shotguns were closed. But they did not work for long in the Bureau, falling victim to the intrigues of the bureaucrats and were fired in the process of reorganizing the Bureau.