In search of sinful Iona... 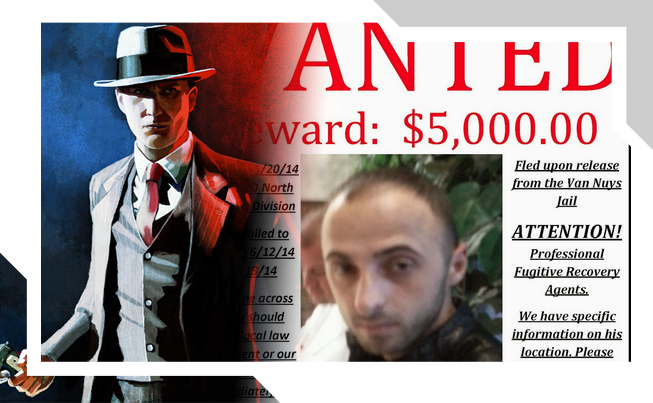 In search of sinful Iona...

Continuing the series of investigations conducted by the Agency for our colleagues from the Vip Bail Bonds, one cannot help but recall one of the Moldavian adventures.

So, we received a request to search for a criminal who went on bail “Vip Bail Bonds” and successfully left the United States.The subject was arrested for being drunk in the backseat of a stolen car. In addition, the patrolmen discovered with him a "check" with heroin. However, as subsequent events showed, he would not have borne any responsibility for this if he had not ...But everything has its time.“I was fascinated” by Ion Gandrabur (that was the name of the escaped) of our American colleagues by the fact that for no apparent reason, he attacked an officer releasing him on bail and disappeared.He disappeared from the state, and as the results of further searches showed - from the USA.

Colleagues from the USA turned to us for help, logically deciding that the fugitive would return to his historical homeland - to Moldova.At the time of their departure to Moldova, Agency employees had information that the wife of Jonah, with whom he married in Vegas and their joint three-year-old son, born in America, had flown from the United States. But most of all, the hope of success was inspired by direct contact from a colleague from the Odessa detective bureau Talion, who studied almost the entire police elite in Moldova.

The minibus Odessa-Chisinau “pleased” with a many-hour excursion to the endless number of small and large Moldovan villages, and thanks to the heavens for the end of this journey, Agency staff landed at the Chisinau bus station.Now the primary task was to find a means of transportation, which the detectives did, going into one of the rent-a-car departments. Their desire to rent an inconspicuous small car was not realized, since their arrival came on holidays and most of the locals went to their native villages, renting almost all the cars. Spit on savings, I had to be content with a big black SUV.Having contacted the contact by telephone, the detectives agreed to meet with a representative of the Chisinau law enforcement agencies on Ryshkanovka, because it was necessary to present “credentials” of overseas partners in order to avoid unnecessary conflicts with local authorities.

The first question that the detectives asked the policeman was: “where can you try the real Moldavian cuisine here?”At the table, during a friendly conversation, the policeman suddenly declares that they say gentlemen, you don’t need to look for this man, I know where he is, since a week ago I detained him!But our detectives, inveterate nihilists, said that while they did not touch the subject and saw him in beautiful handcuffs, they were not going to rest on their laurels.

A gorgeous dinner has ended and friends have already gone for the “booty”.The trip was a complete disappointment - Ion was also a Gandrabur, but not that! Wanted full namesake and cousin.I had to start all over again. We visited the personal friend of the director of the Talion detective agency Boris Tsaregradsky to confer, and simply get the advice of a respected “colony” who trained more than one detective.

They caught a respected man in the “Moldavian metro”, but simply in a huge wine cellar, where he had a sedate conversation with the Deputy Minister of the Ministry of Internal Affairs of Moldova. The detectives did not dare to refuse the persistent invitation and joined the warm company. The result of the tasting, sorry, discussion of various versions was the farewell of the owner: you ... go to the commissariat and there look at your lad at all the bases.After listening to the aksakal from the detective, detectives (both private and sovereigns) went to the police commissariat, where they gave kind people an office and a computer connected to all operational bases.

But unfortunately, the search for Jon came to a standstill - yes, on such a date, he flew to Chisinau from Mexico, crossed the cord and came home and that’s it. He is not at home. And all the relatives and neighbors claim that he does not happen at home. There are no other real estate registered with him or his relatives in Moldova. Only one moment was encouraging - the guy did not leave the country.

After an intensive brainstorming, one of the detectives asked the question: “why not see his wife’s real estate?”. Then the police detective was surprised - he has no wife!The case came out because the marriage was registered in Las Vegas, and in Moldova these two people did not inform the local authorities about the creation of a new unit of society.

By carefully analyzing the data, the mother of Laura Palladi found a two-hectare site in the village of Balanesti (Gora), in the Nisporeni district of Moldova, 60 kilometers from Chisinau. And the documents for building a house there.The detectives of the Agency rushed to the car, so as not to waste time rushing to the address, but the Moldovan colleague held on to the “quick” comrades and explained that at three o’clock in the morning, namely, at how much they would reach this settlement, not a single villager would talk to them will become.Reluctantly, colleagues sat down on the phone and rented an apartment for themselves. It was something!

It turns out that two two-meter foreheads fit perfectly on one double bed under a red canopy! True, if they are folded diagonally.It came to understand that all apartments in Chisinau, renting out daily are used exclusively for a pleasant pastime, and not for spending the night on business trips!Putting their limbs on top of each other in the “diagonal jack” pose, the detectives slept for four hours and, jumping up neither light nor dawn, rushed after their Moldovan friend. Picking up a policeman near the house, a black jeep rushed along the winding Moldovan roads to their destination. Just now, looking at a few carcasses lying below on the side of the car, detectives realized that the SUV on these roads was their luck!Seven in the morning, the village of Balanesti, the courtyard of the house of Laura Palladi ... and the grandfather drunk in a zyuza on a log at the entrance ...

To a request to call Laura, a cute old man replies with an excellent Russian obscenity, that such is not found here. I had to take advantage of the achievement of scientific and technological progress and call Laura on the home phone. Laura answered the call and went out into the courtyard, asking what kind of uninvited guests had come to her.Detectives gently asked, and where exactly is your dearest spouse? To which the girl with aplomb replied that this person is not found here and his whereabouts are currently unknown.So the detectives would leave unsaltedly slurped, but suddenly a new character came out of the house into the courtyard - the wanted one himself!

Having met with joyful welcoming cries of a found comrade, detectives attracted his attention and gave him the opportunity to decide his own fate: he can now be arrested and within three months, during which he will be at a guesthouse in a local pre-trial detention center, Moldovan justice will decide on his extradition to the USA or he agrees to an immediate voluntary departure to the United States and he will be offered a witness protection program.(The catch was that if this entity didn’t appear in court five days later, our American colleagues would lose $ 105,000 in bail, so it is imperative that the wanted person crosses the US border as quickly as possible).

The decision was made, quick fees and investigators with the found return to Chisinau. On the road, I managed to hear an amazing story from him:It turned out that the stupid Ion and his girlfriend Laura arrived in the United States under the "Work and Travel" program. Soon she and Laura got married in Vegas and they had a son, a US citizen. But the hardships of family life affected, and the family began to lack financial resources. What took advantage of the local Armenian gang.The start of a terrific scam was the signing of Laura documents for a loan of $ 150 thousand for the purchase of a house. For this, Jonah was promised a third of the amount, but did not give anything, explaining that the scam did not burn out. Then Ion signed a general power of attorney for the lawyer of the bandits, as a result of which, in different banks, $ 890 thousand was received on bail of the house of financial resources!When this scam came to the attention of the state fiscal authorities, the Armenian geeks realized a new plan: Ion was left insanely drunk in the back seat of a stolen Cadillac with a check of heroin in his pocket! And he was found there by the patrol thanks to the phone call of the “watchful neighbors”!

So, our hero is detained and awaits trial, when the same lawyer comes to him and offers him to conclude an agreement with a pledge company and go free and his Armenian friends will help! But the climax of this conversation was the recommendation of a lawyer - when leaving the police station, hit the escort and jump into the minibus waiting for him in the parking lot! What our "hero" did ...He was smuggled to Mexico, from where he would fly to Chisinau ...The rest of the trip to Chisinau, the detectives were surprised at the extraordinary luck of this simpleton, for he had every chance to finish his days at the bottom of some Mexican cenote ...Returning to the capital, the detectives settled in the President Hotel, where a federal agent made an appointment, had already left for the detainee and enjoyed all the delights of a chic vacation.

By the way, this did not go around Jon as well, because they brought him not in handcuffs, and he freely moved around the hotel. True, accompanied by one of the detectives, a former legionnaire who was known (as "secretly" told Gandrabura the second detective) by his "specialization" - torture. They forgot to tell him that it was just a joke. But the approximate behavior guaranteed :)So, passing the agent who was found in the hands of the arrived agent and waving a handkerchief after the plane, the detectives began to gather for their homeland.

In the photo - the result of the detectives - meeting at the airport (USA). 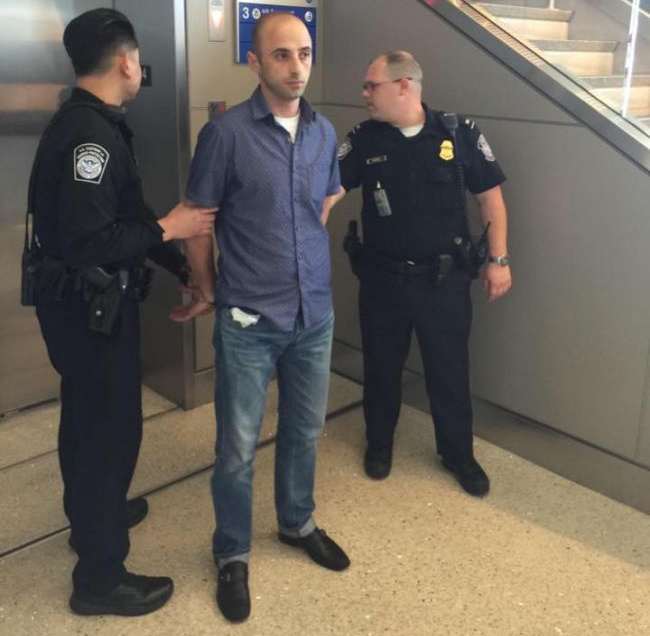